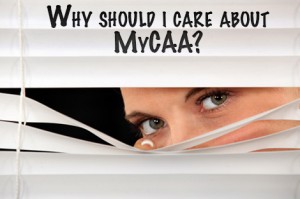 Is your dream to go back to school but you cannot afford tuition or the cost of putting the kids in daycare?

Well then let me tell you about The Military Spouse Career Advancement Account (MyCAA). The MyCAA program provides eligible military spouses with the needed financial assistance to pursue the education and/or career training in a portable career field with no out-of-pocket costs.

MyCAA is an entitlement program, sponsored by the office of the Deputy Under Secretary of Defense for Military Community and Family Policy (DUSD/MC&FP). Which means that MyCAA is not a scholarship and applicants do not have to compete against each other in order to be selected. Instead, you must be the current spouse of an active duty Army, Navy, Air Force, Marine, National Guard, or Reserve member in pay grades E1-E5, O1-O2, or W1-W2 with more than 6 months before separation/retirement.

The Defense Department recognized the challenge that military spouses were facing like unemployment due to relocation, spouse deployment, childcare and financial adversity, so they created the MyCAA program. Sadly many military spouses don’t even realize that MyCAA benefits are available to them or never take advantage of them because they found out too late.

With the MyCAA program military spouses can reinforce their family’s future by gaining valuable career skills in fields like: 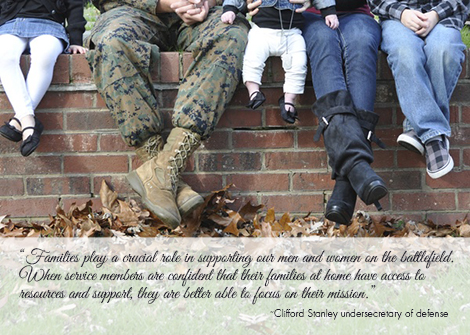 The Military Spouse Career Advancement Account was initially created in 2009 as an incentive for new recruits when branches of the military were looking to expand. Nicknamed MyCAA, it originally allowed spouses of all ranks to receive up to $6,000 of financial assistance to seek training in transferrable job skills, including four-year college degrees or Masters degrees. In it’s first year it quickly outpaced its funding with over 130,000 spouses applying.

In 2010, officials pulled the plug on the program for 8 months in order to review and revamp the qualification guidelines. Then in October 2010, the popular MyCAA program reopened to new participants with several key changes in eligibility and dollar amounts.

“Families play a crucial role in supporting our men & women on the battlefield. When service members are confident that their families at home have access to resources & support, they are better able to focus on their mission” said Clifford Stanley, undersecretary of defense for personnel and readiness.  “We fully support the program and are committed to ensuring the program’s sustainability. “

Have Questions About MyCAA?

If you are military spouse interested in going to college but no longer qualify or never qualified for MyCAA funding, there are educational funding solutions do not involve any loans, debt or personal financial obligation. CLICK HERE to connect with a Military Spouse Admissions Representative.

Thank You MyCAA for helping to change the lives of so many military spouses!

“I was able to utilize the Military Spouse Career Advancement Accounts (MyCAA) program. This financial assistance covered my tuition for being a military spouse pursuing to further my education. So with my husband being deployed and my babies asleep, nights at home were focused on bettering myself.” ~Starlina Baines

“One of the best life changing decisions I have made was using my MyCAA  to go back to school to pursue career in corporate leadership!” ~Angelica Ramis

Brittany is a graduate of the Pharmacy Technician program. Q: What was your favorite part of attending Martinsburg College? “My favorite part about attending Martinsburg College is that it was very user-friendly, and I had everything I needed to succeed in my classes.” Q: What was your favorite course? “My favorite course involved learning about Electronic Health Records information!” Q: What did you like best about your program or about working with the Instructors? “I loved »