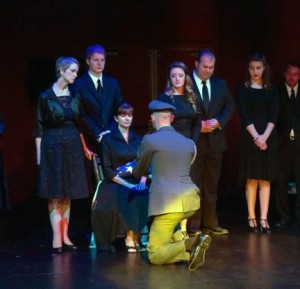 I Will Wait: The Veteran’s Spouse Project by Gregory Stieber and Amy Ball-Uptgraft opened at the Parkview Physicians Group ArtsLab, in Fort Wayne, paying tribute to the men and women who stay at home, keeping their households and families together, while their husbands and wives fight for their country.

The story begins in 1945 at the end of World War II and travels through “forgotten” Korea, the volatile Vietnam era, Desert Storm, and ends with spouses caught in the current cycle of war and deployment.

Over 50 of Fort Wayne’s finest actors, musicians, and dancers volunteered just for the privilege of being a part of the event, which raised money for the Richard Lugar Safe Haven for Veterans, a nonprofit organization that helps homeless veterans transition to permanent housing and receive treatment services.

The concept started with Amy Ball-Uptgraft,  who has lived the life of a military spouse for the past 16 years, through multiple overseas deployments. Spending the last year researching the project talking to fellow spouses, their stories blew her away. Having to say goodbye for years at a time; have babies with absent husbands before the age of Skype; bring husbands home to hostile environments after a year of hell in Vietnam.

Military spouses are the buffer between their soldier and the world

Veteran’s Spouse Project and I Will Wait is a chance for Uptgraft to share her story and the stories of so many before her and beside her. “I sat across the table from three 92 year-old women whose husbands fought in World War II. As they shared their feelings about how it felt to have their husbands gone for years with such little communication, we were all moved to tears.  They were so thankful to have someone ask.”

In this present age, which is the age of smart phones, there is nothing you cannot do parallel space apk the technological development has made it possible for us to do pretty much everything just with a few taps on the apps that are available on smartphones

Uptgraft is determined to connect and amplify all these spouses’ stories so those that follow can gain strength from them. “I want Americans to see that we are all connected, that their grandma or great-aunt Susan shared in these experiences, too; and their connection to the military is often not as far away as it feels.” Uptgraft said.

She herself takes center stage as Spouse #5 in the final scene, a post-9/11 story about modern life as a military spouse.

In his article ‘I Will Wait’ Tells Stories of Generations of Military Spouses, Jim Garamore interviewed playwright Amy Uptgraft for DoD News:

America sends its sons and daughters to war, and a new play titled “I Will Wait” looks at the effect of these deployments across the generations.

Uptgraft’s husband, Jamie, has deployed four times so far in the course of their marriage. They have lived the subhead used in advertising the play — “For every one gone, someone waits.” They live in Denver with their four children.

For every one gone, someone waits

Uptgraft, who worked as an actress and taught theater, came up with the idea for the play while visiting her home in Fort Wayne. “I was sitting with Greg and a friend from college and talking about what we had been through,” she said during an interview. “Greg said we ought to write a play.”

In the cold light of day, she said, it still sounded like a good idea, and the two researched the subject. “The more stories you heard the more, the more connections you saw across the generations,” she said. “This just impacts such a huge population of people that we don’t always think about. We obviously think about the soldier, and rightfully so. That’s where our focus should be. But the ripple effects of war are huge, and there are just millions of Americans who have experienced what it’s like to send soldiers to war and welcome them home, and their lives are forever changed as well.”

We get through together

Through the research, Uptgraft found that the experiences she was going through are not unique. “They are felt really by millions of family members who send people off to war,” she said. Uptgraft said she believes the play gets across the idea “that we get through all this because we are together.”

The play received an “overwhelmingly positive reception,” she said. “I was worried because I had so much invested,” she added. “My big worry was, ‘What happens if no one cares?’ Fifteen minutes into the show and I could hear people crying and being moved. When the play ended, people were immediately on their feet.”

Read the full article: ‘I Will Wait’ Tells Stories of Generations of Military Spouses by Jim Garamone

The Veteran’s Spouse Project aims to curate the collective history of what it means to be an American Military spouse. Your story is part of patchwork quilt of tales- both triumphant and devastating- who’s main characters have covered this nation with protection for decades.

"My favorite part about attending Martinsburg college would be that I got to do my studies at my own pace. My favorite course was medical terms because I learned about a few conditions that I wasn’t aware of before. I liked the fact that they gave me many tools to study with. I’ve had a good experience with the help »