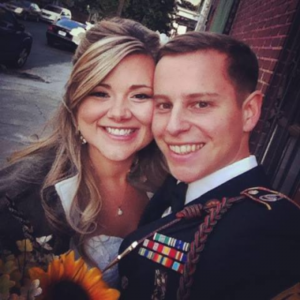 Liz Galuzzi has been an Army wife for almost 4 years and currently lives at Fort Stewart, GA with her husband and two fur-babies. Before they PCSed to Stewart they spent 2 years overseas at Camp Humphreys, South Korea. Liz is a true asset to the Martinsburg College admissions team. She has dedicated herself to helping military spouses go back-to-school and reach their educational goals! Liz says that growing up, she never would have thought she’d call myself a military spouse, but now that she does, she wouldn’t trade it for a thing!

While attending college, Liz worked part time at Starbucks from sophomore year all the way past graduation. Between making lattes and sweeping the floors, this is where Liz met and fell in love with her husband. They worked together for about two and half years before he joined the Army, got married and became the little family they are today!

Q (MSOY): What is something you’ve learned from being a military spouse?

Where to start… I’ve learned so much from my 3 short years as a military spouse! The thing that I’ve found most valuable is definitely how important it is to be flexible. Our lives as military spouses are so hectic and can change with the drop of a hat. You pick up and move your entire life every 2-3 years, sometimes thousands of miles from everything you know. You have to have faith. Have faith in your husband, God, and in yourself, that whatever happens was meant to be and that whatever is thrown your way, you can handle it and thrive!

Q (MSOY): In your opinion, what is one of the most important issues facing military families?

I have the opportunity to meet many spouses through my job. One issue that I see frequently and believe has the biggest impact on families’ quality of life is financial stress. So many military families are struggling to pay their bills because they do not understand how to manage their finances. Personal finances are a somewhat taboo topic, so many people do not reach out for help until it is too late. Providing more awareness of the classes and support offered through ACS would greatly benefit our military families. Financial problems impact more than just our pocketbooks; they effect our self- image and put stress on relationships.

Q (MSOY): In your opinion, what is one of the best aspects of being in a military family?

Support. We experienced this right away when we moved to the other side of the world (3 months after getting married). We were in a country where we could not speak the language, had no car, no friends and no other family. My husband and I leaned on each other for everything. We supported each other and our marriage became incredibly strong from that experience. I have met some of the most supportive, tight-knit families during my time as a military spouse. When you are stationed halfway across the country/world from the rest of your friends and family, you have to rely on each other. It’s something that may occur out of necessity, but I believe it is a spectacular aspect of being a military family.

Q (MSOY): What is one thing you would want to accomplish with the MSOY title?

I am incredibly passionate about learning. I believe that everyone should have the opportunity to further their education and the military offers amazing benefits for spouses to do so. A great deal of military families did not have an opportunity to go to college before signing up for this crazy life and I would love to spread the word about the benefits of education throughout our amazing community. Education is something that no one can take away from you, it is empowering and creates a deep self- confidence that allows military spouses to succeed. I would love to use the MSOY title to spread the word about the many educational benefits offered to military spouses and the importance of education.

Kadee is a graduate of our Pharmacy Technician program. Here is what she had to say about her experience: My favorite part of attending Martinsburg College was the convenience of my courses. As a military spouse and a normal human, I'm busy. Life gets in the way sometimes and the convenience of online courses, it made it very easy for me to stay on track. The instructors are very helpful in reminding you if you have a quiz soon and they're quick to respond. I feel like I've already »